Four words: Easy Chocolate Frosted Donuts! They’re light an airy on the inside, but slightly crisp on the outside. Plus the added bonus of the not too sweet chocolate frosting and you’ve got a sweet treat for those lazy weekend mornings.

Full disclosure – this recipe is, from what I’m told, considered a hack. ***shrugs shoulders*** I get it, you’re essentially cutting the whole donut making process down to a mere 20 minutes while eliminating the craftsmanship that comes with waiting patiently for a yeasted donut to rise. In fact, I dont know if this would even qualify as a donut recipe. I get it, I personally was against it too.

But quarantine has us all bending the rules, changing our perspective, and making us try things we swore we would never do, like use canned biscuits for donuts. There was not logic the day I tried this recipe. It was a weekend morning, and a lazy one at that. Pinterest got the better of me that day and I decided why not. I stand here before you today to let you know I am a changed woman. HOLY COW WHAT HAVE I BEEN MISSING!

These are now the default birthday morning treat (we’ve had 3 so far in quarantine) and truthfully it’s been hard not to make them more often. They’re simply delicious.

Seriously, give these bad boys a try. They’re super easy, quick to make and will give you the perfect treat for lazy weekend days. Let me know what you think! Enjoy! 🙂 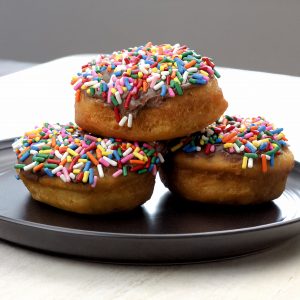 Easy Chocolate Frosted Donuts! They're light an airy on the inside, but slightly crisp on the outside. Plus the added bonus of the not too sweet chocolate frosting and you've got a sweet treat for those lazy weekend mornings.
Print Recipe Pin Recipe
Servings 8 Donuts